100 years since the great battle for Canadians: 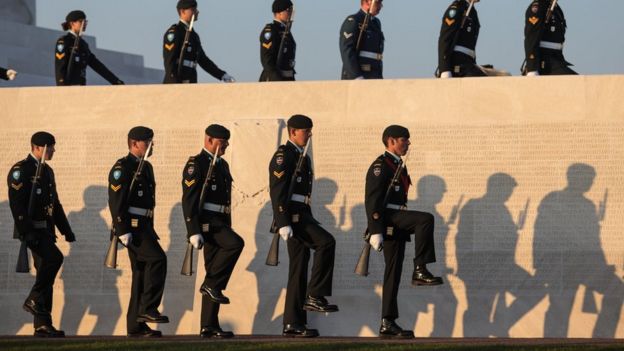 More than 20,000 Canadians have travelled to Europe to mark the centenary of one of the country's defining moments - the Battle of Vimy Ridge during World War One.

About 3,600 Canadians died in the battle in northern France, that began on Easter Sunday, 9 April 1917.

It was the first time different Canadian military divisions had fought together under one command.

Prime Minister Justin Trudeau paid tribute to those who fought.

"The Battle of Vimy Ridge was a turning point in the First World War and for Canada, when Canadians acted - and fought - as one," he said.

Having laid flowers at the site of the battle earlier on Sunday, Mr Trudeau attended a commemorative ceremony with French President Francois Hollande, the Prince of Wales, the Duke of Cambridge and Prince Harry.

The Queen also sent a message to Canadians in French and English commending their soldiers for the sacrifice they made.

The battle of Vimy Ridge, near Arras, was part of a wider British-led offensive that acted as a diversion from a French attack to the south, and proved successful in its aim.

The battle across a 7km (4.3-mile) ridge began in heavy snow and sleet and lasted four days. Four Canadians went on to earn the Victoria Cross, the British military's highest award for bravery.

More here about the battle: