I feel it's time to start a thread about idiotic stuff that is spewed from one of Donald Trump's orifices.

So he wants to ban all Muslims from entry to the USA (I wonder what he'd do to the ones who are already US citizens).

Then he came up with some rubbish about London. This has provoked a considerable backlash in the UK and London in particular.


London's Metropolitan Police weighed in, rejecting the suggestion that there were areas in the city that officers were too scared to patrol.

"We would not normally dignify such comments with a response, however on this occasion we think it’s important to state to Londoners that Mr. Trump could not be more wrong," a spokeswoman for the police said in a statement.

She offered Trump a tutorial: "Any candidate for the presidential election in the United States of America is welcome to receive a briefing from the Met Police on the reality of policing London."

"As a city where more than 300 languages are spoken, London has a proud history of tolerance and diversity and to suggest there are areas where police officers cannot go because of radicalization is simply ridiculous," he said.

"The only reason I wouldn’t go to some parts of New York is the real risk of meeting Donald Trump," Johnson quipped.


Donald Trump faced universal anger and ridicule after he called for Muslims to be banned from the United States – and claimed that parts of London were “so radicalised” that police were “afraid for their own lives”.

Furious MPs and Muslim groups argued in response that anti-extremist legislation should be used to ban the billionaire Republican presidential hopeful from the UK if he attempts to visit Britain.

An online petition on Parliament's website demanding that Mr Trump is banned from the UK had more than 30,000 signatures first thing on Wednesday morning. The Government is obliged to respond to any petition with more than 10,000 signatories.

David Cameron took the unprecedented step of intervening in an American election by issuing a scathing rebuke to the front-runner to gain the Republican nomination for the presidency. The Prime Minister was backed by leaders of all political parties, the candidates to become London mayor, the Metropolitan Police, think-tanks and influential Muslims...

...Jeremy Corbyn, the Labour leader, denounced the remarks as “an attack on democratic values” and an “affront to common humanity”.

The Scottish First Minister, Nicola Sturgeon, said: “Donald Trump’s comments are obnoxious and offensive, and have rightly been condemned by people across the political spectrum.”

Tim Farron, the Liberal Democrat leader, said: “For someone trying to be president of America it frankly shows why he is utterly unsuited for the role.”...

...As public disgust at the US presidential hopeful’s comments grew in Scotland, an Aberdeen university that once awarded him an honorary degree said it was “considering” whether to revoke it. By 5pm more than 7,500 people had signed a petition calling on Robert Gordon University to strip Mr Trump of the award.

A new take on Trump:

The petition to ban him from the UK has now got over 300k signatures. I wonder if it will get to a million.

For a bit of humor, a bald eagle named Uncle Sam tried to attack him during a photo shoot. link
Top

The attack on Haque is just the latest in a series of escalating violence and threats against Muslims around the US. Earlier this week, a Muslim 6th-grade student wearing a hijab was attacked by her classmates, who called her ISIS as they put her in a headlock, punched her, and tried to tear off her hijab. The same day, a mosque in Philadelphia reported that an unknown man in a red pickup truck left a pigs head at the front door of the Al-Aqsa Islamic Society in the early morning hours  pork is considered unclean to practitioners of Islam. And a mosque in Irving, Texas, has been repeatedly targeted by heavily-armed, anti-Muslim protesters since the Paris attacks.

According to a MSNBC poll, the vast majority of people agree with Trump. 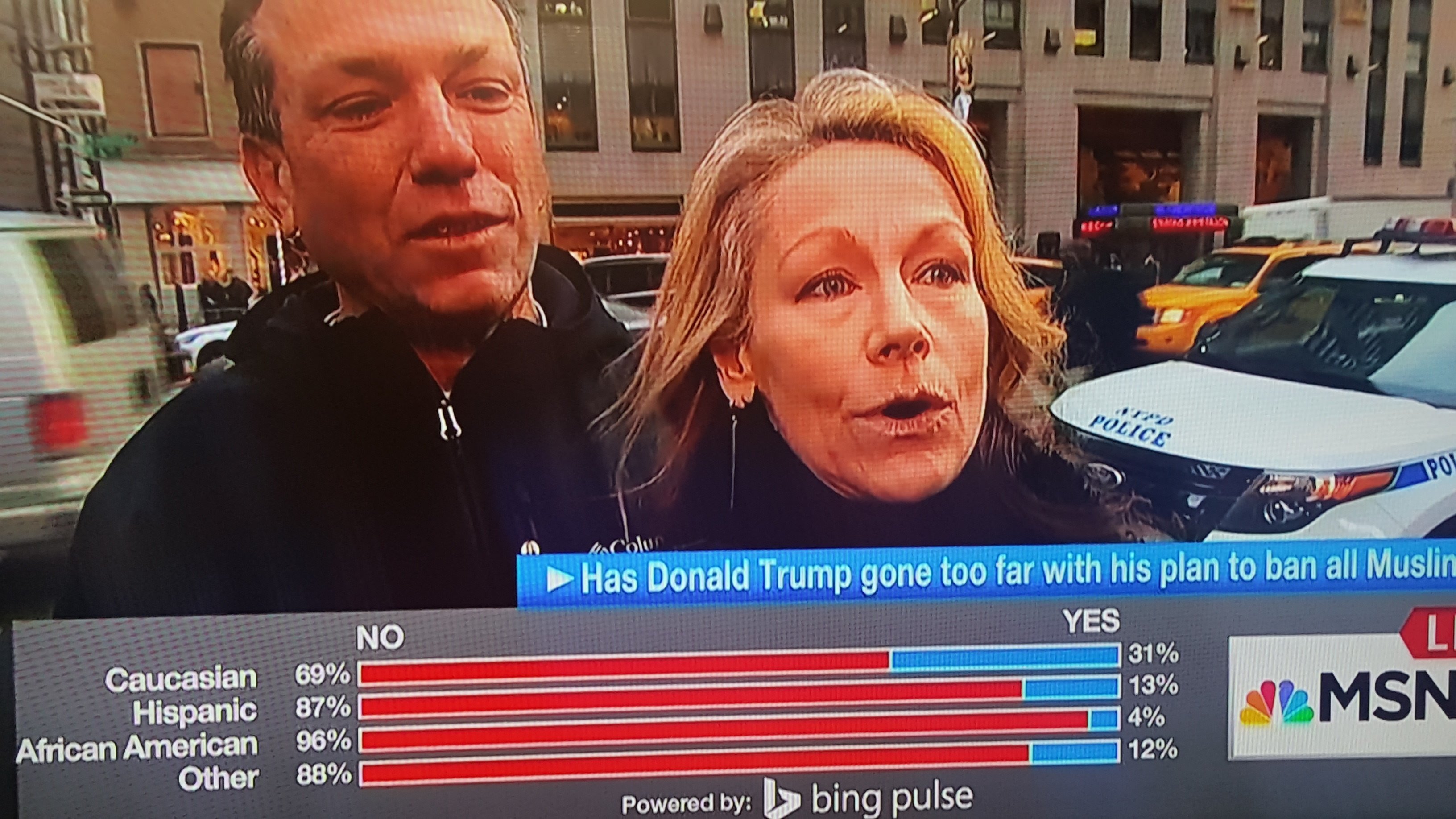 The welfare of the people in particular has always been the alibi of tyrants, and it provides the further advantage of giving the servants of tyranny a good conscience.
-Albert Camus
Top

[quote=""Jerome""]According to a MSNBC poll, the vast majority of people agree with Trump.

looking at that poll chart it says "has trump gone too far with his plan to ban all muslims?" this is not a poll on if people agree with trump.... people can say "oh well it's Trump, why would we be surprised of anything he does?" so typically an MSNBC viewer wouldn't think trump is going too far with his outrageous proposal. This does not mean they agree with him... Also a MSNBC bing pulse? this is what you are going on? a bing pulse can be about 500 people at most who actually participate if you really call this a "vast majority of people".
Top

Yesterday, Donald Trump called for, quote, "a total and complete shutdown of Muslims entering the United States until our country's representatives can figure out what is going on."

Do you strongly agree with this statement? Somewhat agree? Somewhat disagree? Or strongly disagree?

This is liberal California!

If terrorism stays in the news, Trump will win both the GOP nomination and the Presidency.

http://www.surveyusa.com/client/PollRep ... um=twitter
The welfare of the people in particular has always been the alibi of tyrants, and it provides the further advantage of giving the servants of tyranny a good conscience.
-Albert Camus
Top

An opt-in poll is not legitimate. You'd need a randomly taken poll conducted by phone or such. If it is promoted on right wing sites and not elsewhere, it will get a right wing answer. Bad poll design in 1948 resulted in the "Dewey Defeats Truman" headline. Plenty of voters, myself included, never saw this poll (I never even heard of "usapolls" then there are still a good number of people who vote that don't even have internet access...
Jesus Christ people who never took courses beyond intro in social science (or statistics) don't get this shit...
Top

...
The welfare of the people in particular has always been the alibi of tyrants, and it provides the further advantage of giving the servants of tyranny a good conscience.
-Albert Camus
Top

I think the petition to ban Trump from the UK has at least as much to do with the nonsense he trumpeted about London as about his desire to ban Muslims from the USA.
Top

Yes and he'd have to pick and choose this time too, even if he got his way. There was a retired pilot on the radio yesterday who said he used to regularly fly Saudi Princes into New York for shopping trips. I'm guessing Trump would not bar them.

In the end, Trump is talking money, power and privilege. He just dresses it up as other issues to get votes from the foolish, powerless plebs that his breed of capitalist exploits for profit.
Top


A Saudi prince has described US businessman Donald Trump, a candidate for the Republican presidential nomination, as a "disgrace to America".

Prince Alwaleed bin Talal said on Twitter that Mr Trump should give up his presidential ambitions because he would never win.

It follows Mr Trump's call for Muslims to be barred from entering the US for security reasons.


A Saudi prince has described US businessman Donald Trump, a candidate for the Republican presidential nomination, as a "disgrace to America".

Prince Alwaleed bin Talal said on Twitter that Mr Trump should give up his presidential ambitions because he would never win.

It follows Mr Trump's call for Muslims to be barred from entering the US for security reasons.

[/quote]
I feel that I have to respect Trump's judgment on that score. After all, this Saudi prince originally backed him and is now withdrawing his support. Remove the "Trump supporter" from "dopey Trump supporter", and you still have "dopey".
Top

http://www.huffingtonpost.com/entry/don ... 58f656ddc5[/quote]
That was not bad. I wonder how it would come off with a Cockney accent or a German accent. Nice idea.
Top

I don't get it. Isn't that how China is pronounced??

Is this a result of Trump's posturing? This family had got visas for the US, where they intended to visit Disneyland. The had paid out £9000 for the trip. Then after they had checked in they were told that they were being refused entry.


Mohammad Tariq Mahmood and 10 members of his family were already at Gatwick Airport on 15 December, ready to board a Norwegian Airlines flight to Los Angeles, when they were approached by officials from the US Department of Homeland Security and told their authorisation to travel had been cancelled.

They had been planning to visit Disneyland in California.

Mr Mahmood said no reason had been given, but told the Guardian newspaper that he thought it was "because of the attacks on America - they think every Muslim poses a threat".