Switzerland and the wounded of WW1

Switzerland and the wounded of WW1

This particularly interests me because I have a long connection with Château d'Oex. 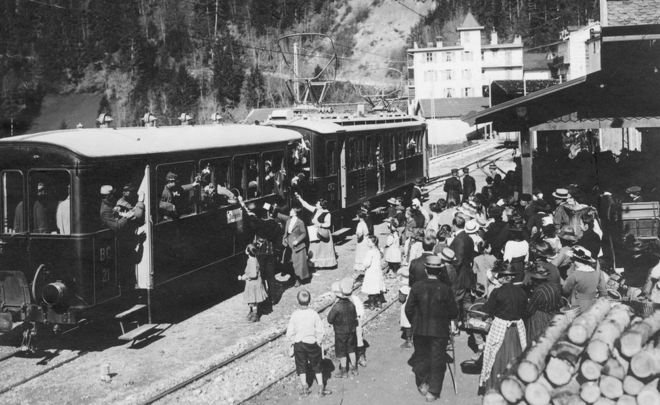 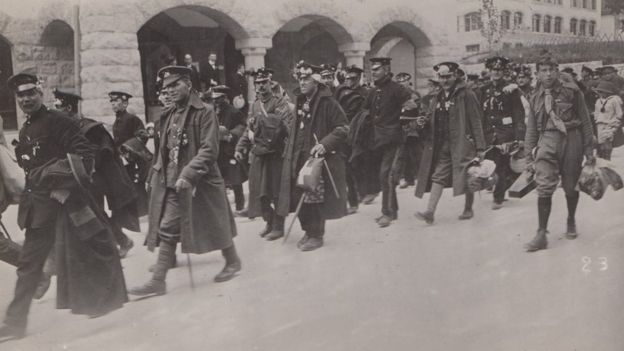 Two of the bloodiest battles of World War One, Verdun and the Somme, are being marked 100 years on, but in Switzerland, centenary commemorations are taking place for a far less known wartime event.

The first contingent of wounded British soldiers arrived on 30 May 1916 for internment in the tiny village of Chateau d'Oex.

Between 1916 and 1918, Switzerland accepted 68,000 sick and injured soldiers: French and German as well as British.

Under the agreement of the warring parties, and with the help of the Red Cross, they were transferred to Swiss mountain villages to recover, and to sit out the war.

It was, says Swiss historian Cedric Cotter, a pragmatic solution welcomed by all sides. "A lot of the prisoners needed medical care, but there weren't enough doctors in the POW camps, they were all at the front taking care of their own soldiers."

And, he adds, it was a chance for Switzerland, surrounded by belligerents at the time, to show that its neutrality could be useful. The example of neutral Belgium, invaded by the Germans in 1914, had shocked the Swiss, and for two years the government had, according to Mr Cotter, been trying to find policies that would keep the country safe.

...Mr Girardet began doing some research, and uncovered a dramatic tale. When the first train carrying wounded prisoners crossed the border into Switzerland, he learned, the rail tracks were lined with cheering Swiss citizens.

"There was a band at the station in Montreux," says Mr Girardet. And by the time the train arrived in Lausanne, "thousands of people were waiting, throwing flowers into the carriages"...

...Britain's ambassador to Switzerland at the time, Sir Evelyn Grant Duff, went to Chateau d'Oex to welcome the British soldiers, and wrote in his diary that evening: "It is difficult to write calmly about it for the simple reason that I have never before in my life seen such a welcome accorded to anyone, although for 28 years I have been present at every kind of function in half the capitals of Europe. At Lausanne some 10,000 people, at 5am, were present at the station.

"Our men were simply astounded. Many of them were crying like children, a few fainted from emotion. As one private said to me: "God bless you, sir, it's like dropping right into 'eaven from 'ell."...

...the start of World War One had virtually destroyed Switzerland's tourism industry. The traditional guests from Britain and Germany were simply no longer coming.

When Alpine resorts heard that the Swiss government was planning to build barracks for the internees, they offered to house them in their own empty hotels.

"They actually competed to host the soldiers," says Guy Girardet. "The reason Chateau d'Oex got the first contingent of British soldiers was because its letter [to the Swiss government] arrived first."

This was more than just an act of charity: the British, French, and German governments were paying for the upkeep of their soldiers.

While no-one got rich out of Switzerland's internee programme, Guy Girardet believes that for many hotels it made the difference, during the war, between survival and bankruptcy.

And so thousands of wounded soldiers were sent, not just to Chateau d'Oex, but to Verbier, Zermatt, Murren, and many other now well-known resorts...

...One hundred years on, historian Cedric Cotter believes the welcome for so many wounded prisoners of war paid political dividends for Switzerland, encouraging its European neighbours to view its neutrality in a more positive light.

He suggests it even influenced the decision to use Geneva as the base for the new League of Nations, and ultimately the European headquarters of the United Nations.

Fascinating! Another reason to admire the Swiss. What a combination of diplomacy, pragmatism, and altruism!
Top

Mr DMB and I were invited to go to the commemoration in Château d'Oex, but I didn't want to go and he forgot!
Top

Thanks for the history lesson. Makes me wonder what changed Switzerland to make it so inhospitable to alien Jews up to and during WWII.
I don't care to belong to a club that accepts people like me as members - Groucho Marx
Top

[quote=""laughing dog""]Thanks for the history lesson. Makes me wonder what changed Switzerland to make it so inhospitable to alien Jews up to and during WWII.[/quote]

I think they were scared of the Nazis.
Top
Post Reply
6 posts • Page 1 of 1